Jake McCabe ('23) scored the only goal of the night on Wednesday as the Bulldogs traveled to North Attleboro and came home with their second win over the Red Rocketeers in 48 hours, this time- 1-0.

The game was tied throughout a hard-fought first half but the 'dogs struck early in the 2nd when a strong Bulldog build-up found it's way to Jacob Crugnale ('22) who attracted two defenders before slipping it perfectly to McCabe who scored his first goal of the season, slipping it by a charging NA keeper.

The dog's bent a bit to a late push from NA but held off several Rocketeer chances late in the game, including a ball cleared from the goal line by a streaking Abdul Barrie ('21).

Giovanni Ruggeri ('22) was strong in goal again, earning his 2nd shutout of the week and 4th on the season.

Posted by Danny Erickson at 11:08 AM No comments:

Monday night saw the Bulldogs improve to 3-0-2 with an impressive 2-0 win over visiting North Attleboro.  The win was paced by the senior class of players who were all honored in a pre-game ceremony attended by their parents and families.

Starting for the Bulldogs in the big win were our members of the class of 2021- Dom Sica, Matt Giglio, Huy Hong, Nam Pham, Colton Mirliani, Will Keefe, Abdul Barrie, Pat O'Leary, Wes Lee, Matt McDonough and TJ McCabe.  McCabe, who's knee injury is keeping him off the field this year, provided the team with an inspirational kickoff to the game as he was able to take part in the kickoff.  Fellow senior Ryan Mullen, who is the team manager, was also honored with his teammates in the pre-game ceremony.

Once the action got going, the Dogs had most of the play on the night but were unable to convert until early in the 2nd half when Colton Mirliani converted a give-and-go with Jake McCabe ('23) and hit a great, low, hard shot from 25 yards out that beat the keeper to his near post.  Not long after, Mirliani would strike again, this time after Erik Valdovinos ('22) went down in the penalty area with no call, but popped up quickly and found Mirliani who beat his mark and calmly finished for his second goal of the game.

North Attleboro had several opportunities late in the game to cut the lead in half but the Bulldog back four and goalkeeper Giovanni Ruggeri ('22) were up to the challenge and preserved the team's third shutout of the season.

It should be a great rematch on Wednesday when the Bulldogs travel to North Attleboro for a 6:00pm game.

Posted by Danny Erickson at 10:50 AM No comments:

Dogs remain unbeaten with win and draw with Sharon

This week saw the Bulldog Boys Varsity Soccer team face off against Sharon High School in a home-and-home matchup that saw the dogs travel to Sharon on Wednesday and host the Eagles on Friday.  Both games were played on wet surfaces but both teams handled the conditions well.  Wednesday's game at Sharon ended in a 1-1 draw while Friday night's game in Canton saw the Bulldogs come out on top, 2-0.

In Wednesday's draw, the Bulldogs came out strong but for the 2nd straight game, were unable to capitalize on early chances, resulting in the 'dogs allowing the Eagles to come back and bury a shot from the top of the box that came against the flow of play.  The Eagles carried much of the play from that point on, until the final 10 minutes when the Bulldog were able to create several good chances, finally resulting in Dylan Baird ('22) burying a rebound off of an Abudl Barrie ('21) free kick and earning the visitors a crucial point on the road.

Friday night was the Bulldogs' best performance of the young season as they dominated play throughout the first half but found themselves tied with the visiting Eagles at the break.  But the 'dogs raised their level even further in the 2nd half, culminating in Colton Mirliani's ('21) bomb of a shot to the top corner off of a nice drop pass from Jacob Crugnale ('22).  Not long after the goal, Erik Valdovinos ('22), who was a handful for the Eagles left back all week, exploded into the box before being taken down from behind, earning the Bulldogs a penalty kick. Abdul Barrie stepped up and calmly tucked the penalty into the side netting, just out of reach of the outstretched Sharon keeper.   Giovanni Ruggeri earned his second shutout of the season in goal for the Bulldogs while Will Keefe ('21), Matt Giglio ('21), Jorge Sanchez ('23), and Carson Eagles ('23) were a stingy back four throughout the night.

Reminder that, due to Covid-19 Guidelines, only family members of home team student athletes will be allowed to attend the game.  Games are being live streamed. Check this blog for details.

Posted by Danny Erickson at 7:03 AM No comments:

Streaming info for Sharon at Canton on 10-16

It is supposed to be a rainy night at Memorial Field in Canton tonight as the Bulldogs host Sharon.

Can't make the game or our Covid-19 spectator policy excludes you? We are live streaming it at-

Periscope.....either go to the periscope.tv website or upload the app on your mobile device and search for "Weletthedogsout" Game will stream live beginning at kickoff at 6:00pm.

Posted by Danny Erickson at 8:59 AM No comments:

A different Stoughton team showed up for the showdown with the Bulldogs on Wednesday afternoon at SHS than had showed up on Monday evening at CHS.  As a result, a great high school game unfolded that ended up in a 1-1 draw. The game featured two late goals as the Black Knights scored in the 71st minute before the Bulldogs struck back in the 74th minute.

The Bulldogs started the game on the front foot, putting Stoughton under good pressure early, but the team could not convert and let the upstart Knights gain some life and eventually some great momentum. Both teams had plenty of opportunities as the game opened up in the 2nd half.  Giovanni Ruggeri ('22) made several saves in the 2nd half after making none in the first. Canton's goal came on a great service by Will Keefe ('21) from left side of midfield.  His pass found a streaking Colton Mirliani ('21)behind the Black Knight back line and Mirliani bravely beat the goalkeeper to the ball for a one touch, class finish.  See goal here on Twitter.

The 'dogs move to 1-0-1 and have their longest stretch of the season without a game between this one and next Wednesday's trip to Sharon for a 3:45 start.

Posted by Danny Erickson at 8:27 AM No comments:

This week sees the Bulldogs face off against the Black Knights of Stoughton in a home-and-home two game series between the two rivals.

The 'dogs controlled most of the play early on but did not get on the scoreboard until the 2nd quarter when they exploded for 3 goals in 15 minutes.  Caden Mirliani ('23) found Jacob Crugnale ('22) who calmly finished the first goal of the 2020 season.  Shortly after, Crugnale was the provider as he assisted on the first of two Abdul Barrie ('21) goals. Dylan Baird ('22) had a great finish off yet another deft touch by Crugnale for the 3rd goal of the quarter.

The 'dogs didn't slow down in the start of the 3rd quarter as Jorge Sanchez ('23) found Barrie on the far post for a smooth finish- making the score 4-0.  Stoughton played well down the stretch but the Bulldog defense denied any real scoring opportunities for the visitors.

Posted by Danny Erickson at 7:15 AM No comments:

It has certainly been an off-season like none we have ever seen before, but the CHS Boys Soccer teams will be taking the field for their first games of the season on Monday, October 5th against visiting Davenport rival- Stoughton High School.  JV will kickoff at 3:45 and Varsity will kickoff at 6:00pm.

Three seniors will be sharing the captains' armbands this fall for the varsity side as TJ McCabe and Matt Giglio join Will Keefe in this important role.  McCabe and Giglio are both four year varsity players and were recently announced as Bulldog captains- joining Keefe who was named at the conclusion of the 2019 season.  Giglio and McCabe will look to lead in their own ways as Giglio will join Keefe as part of the Bulldog back line while McCabe will be inspiring from the sidelines as he deals with an injury.  Both, along with Keefe are up to the challenge of helping the Bulldogs rebound from a disappointing 2019 season. 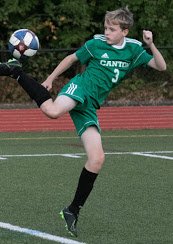 The Bulldogs have many returning faces from the 2019 campaign that are looking to make a major impact. Seniors Colton Mirliani, Dom Sica, and Patrick O'Leary all look to put their stamp on this season and are all off to a great start.  Juniors Erik Valdovinos and Jacob Crugnale are looking to shoulder much of the scoring load for the Bulldog attack.  Fellow Junior, Giovanni Ruggeri is ready to assume the starting goalkeeper role and has worked hard in the off-season for the promotion. Fellow Junior Jay Kelleher has shown huge improvement from his debut season on varsity in 2019 and will certainly make major contributions this fall.  Sophomores Jorge Sanches, Carson Eagles and Caden Mirliani have all had great pre-seasons while the team is excited for a return to action for Jake McCabe who has been on the injured reserve list.

The team faces a 10 game regular season schedule that features 5 weeks of back-to-back games against each of our opposing Hockomock Davenport Division foes- Foxboro, Sharon, Stoughton, OA and NA. A Hockomock Cup is expected to provide playoff excitement in November.

Put your email in the "follow by email" option on the top right of this page to get email notifications of updated blog entries.

Season rosters with jersey numbers can be found at the CHS Boys Soccer Website (rosters to be updated VERY soon!)

Posted by Danny Erickson at 4:27 PM No comments: